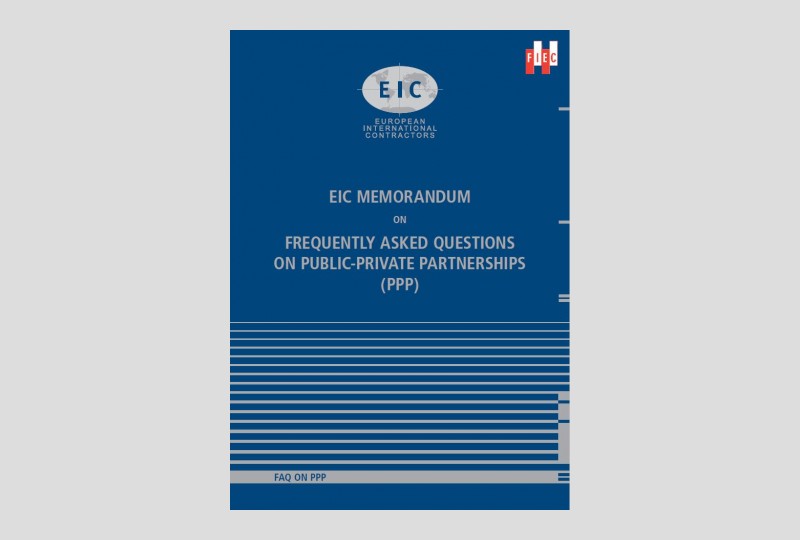 European International Contractors (EIC) is an industry association based in Berlin, Germany, that represents the interests of the European construction industry in all questions related to its international activities. Members are construction industry federations from 16 European countries which are also linked with the European Construction Industry Federation (FIEC) in Brussels. The international revenues generated by the EIC member companies amounted in 2005 to some 80 billion € of which a significant portion is already generated through Public-Private Partnerships (PPP) projects. Since Europe’s leading international contractors have, on a global scale, developed substantial activities in all types of PPP infrastructure and public sector buildings, they have gained a very broad knowledge on the prerequisites for making such partnerships successful on a long-term basis.

With the “EIC White Book on BOT/PPP” (April 2003) we already highlighted the most important technical risks and pitfalls during the crucial stages of a PPP project and we have given more then 20 concrete recommendations for the technical implementation. When we presented these recommendations in the political debate, we noticed, however, several recurring misconceptions with a potential to undermine the credibility of the entire PPP philosophy.

EIC, therefore, believes that it is crucial to supplement the “White Book” with a more general response to some “Frequently Asked Questions on PPP” in order to contribute the European industry’s viewpoint to the ongoing debate on the national, European and international levels. With this Memorandum, EIC advocates the concessionaire’s perception, i.e. the perspective of those companies that actually are prepared to put their shareholders’ money at risk in connection with a PPP project. In our Memorandum, we seek to explain why the PPP concept has a strategic advantage over the conventional project programming and for which types of infrastructures or public sector buildings a Government would benefit from entering into a comprehensive partnership instead of separating the design, construction and operation phases. By referring to some – positive and negative – example cases, we try to illustrate the practical impact of the issues discussed.

When using the term “Public-Private Partnerships”, it must be kept in mind that there is not yet an all-encompassing definition. For the purpose of this Memorandum, readers will recognise that the PPP approach is often described as an alternative and innovative procurement method through which the Contracting Authority purchases from the private sector not merely an infrastructure facility or a public sector building, but beyond the construction of the physical asset also the asset-related operation and maintenance service over the entire life-cycle of the project. The public sector gains through this procurement method additional Value for Money because it will pass on the project performance risk to the private sector which is only remunerated if and when it performs the infrastructure service to the previously agreed standard. The fundamental “PPP Principles and Concepts” are summarised in a short version in the Appendix.

Concluding, we wish to quote from a World Bank Working Paper on Public-Private Partnerships dated March 2003 which will remain, in our view, topical around the globe for the foreseeable future: